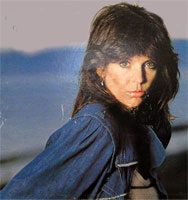 Dallas-born Karen Brooks came up in Austin's country music scene. During the latter half of the '70s and the early half of the '80s, she leant her Vocals to recordings by Jerry Jeff Walker, David Allan Coe, Steve Fromholtz, Gary P. Nunn, and Townes Van Zandt. She then headed to California to work alongside Rodney Crowell, where she eventually picked up a recording contract with Warner Bros. Both "New Way Out" and "Faking Love" hit the Top 20 of Billboard's country singles chart, with the former — a duo with T.G. Sheppard — reaching the top position. Before leaving Warners, she released two mid-'80s albums, Walk On and Hearts on Fire. She was relatively quiet until 1992, when she released an album with Randy Sharp. The album, titled That's Another Story, was released on Mercury.