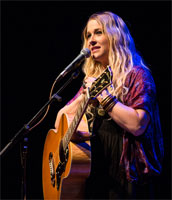 Catherine Britt was born and raised in Newcastle on Australia's eastern coast, where she fell under the spell of country music while still a young child. When she was 11 years old, Britt met singer Bill Chambers before one of his Australian concerts, asking him to sing Jimmie Rodgers' "T.B. Blues." Chambers was stunned that such a youngster would even know the song (or have heard of Rodgers), and ended up inviting her up to sing it with him during the show. Britt clearly was a phenomenal singing talent, and Chambers took her under his wing, producing her In the Pines EP, which was released in 1999. Britt was only 14 when a single from the project, "That Don't Bother Me," which was co-written with Chambers' daughter, Kasey Chambers, dented the country charts.
A full-length album, again produced by Bill Chambers, Dusty Smiles and Heartbreak Cures, was privately released in 2001. The album was picked up by ABC Records and re-released a year later in 2002, and garnered heavy Australian radio play. While touring Australia, Elton John heard Britt's album and began praising it in the press, which led to a meeting between the two singers. With John's help, Britt received several offers from American record companies, and she chose to sign a contract with RCA Records, which released a single, "Upside of Being Down," in 2004. Her first full-length on RCA, Too Far Gone, produced by Keith Stegall and Bill Chambers, was released early in 2005, when Britt was only 19 years old.