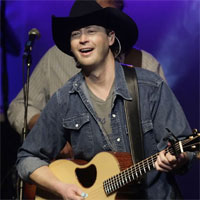 Paul Brandt (born Paul Rennee Belobersycky, July 21, 1972) was one of the Canadian country singers able to take advantage of the massive success of Shania Twain and parlay a successful career for himself in America.
Brandt was born and raised Calgary, Alberta, where he sang gospel music and learned to play guitar as a child. During high school, he began playing local talent contests, singing his own songs. Most of his original material was directly inspired by neo-traditionalists like Dwight Yoakam and George Strait. Instead of pursuing country music as a full-time career, he decided to attend college and study nursing. For two years, Brandt went to college and practised as a pediatric nurse at Alberta's Children's Hospital. However, he continued to enter local talent contests and to place well in each event.
The turning point in Brandt's musical career came when he entered a national contest sponsored by the Canadian performance organization, SOCAN. At the contest, Brandt won first prize for Best Original Canadian Country Song with "Calm Before the Storm," and placed as the runner-up for Best Performance. The SOCAN competition was monitored by several insiders in the Nashville music community, and Warner Bros. expressed interest in signing the singer. A demo tape of Brandt's songs made its way to Reprise's Nashville office. Reprise arranged to see a showcase concert by Brandt and, following the show, the label signed the young singer.
After signing the record contract, Brandt moved to Nashville, where he recorded his debut album with producer Josh Leo, who had previously worked with Kathy Mattea and Alabama. Brandt's debut, "Calm Before the Storm," was released in June to critical acclaim and strong sales. Outside the Frame was released the next year, followed by both That's the Truth and A Paul Brandt Christmas: Shall I Play for You in 1999. The live album Small Towns & Big Dreams arrived in 2001, followed by This Time Around in 2004 and Gift in 2006.