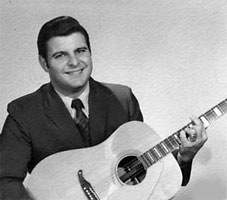 US Rockabilly singer, Burl Boykin, of Beaumont, Texas was once known as "Little Elvis" for his spirited version of "Hound Dog" now enjoys performing the songs of Johnny Cash. Burl hit the music trail as a 6-year-old yodeler, learned to play the guitar in high school, and formed his first band, The Rockin' Rebels, with Ed Morgan and Johnny Winter. His boisterous, joyful performances have never disappointed an audience. Burl does impressions of over fifty rockabilly and rock 'n' roll artists. His hit single "Let Me Come Your Way" with Johnny Winter became a number one song in England. Burl has been inducted in the Rockabilly Hall of Fame as a top male vocalist.