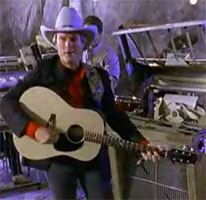 Larry Boone was born in Cooper City, FL, on June 7, 1956. He set off for Nashville in 1981, after financing a stint at Florida Atlantic University with singing gigs in local Florida honky tonks. At first, Music City was unkind to the young singer/songwriter. Boone busked on the city streets, substitute taught, and even worked as a sportswriter before finally landing a songwriting gig with MTM. In 1985, Marie Osmond charted with his song "Until I Fall in Love Again," and the exposure led to more of his songs finding singers. Nashville nice guy John Conlee would even perform Boone's "American Faces" on NBC during the 1988 Olympic Games.
In 1986, Boone signed with Mercury as a solo artist, but his initial singles didn't make much noise. Nevertheless, the label issued his full-length debut in 1988, hoping to chip some success off of the formula popularized by country hunks like Garth Brooks and Clint Black. Neither Boone nor his album found that level of fame, but the single "Don't Give Candy to a Stranger" did find the Top Ten in 1988. Meanwhile, Boone's songwriting career continued to flourish. That same year, Kathy Mattea took his "Burnin' Old Memories" to number one, and "Old Coyote Town" was a Top Ten hit for Don Williams. Boone recorded two more lukewarm LPs for Mercury before jumping to Columbia, where his 1993 album, Get in Line, was a minor chart hit. He continued to work as a songwriter, and in 1998, Lonestar hit number one with the Boone composition "Everything's Changed."