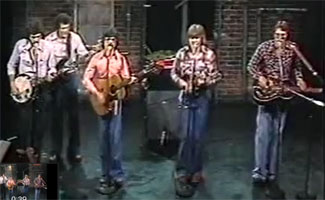 Boone Creek was the first band Ricky Skaggs led after his apprenticeship with Ralph Stanley, Country Gentlemen, and J.D. Crowe & the New South. Skaggs formed the band in 1977, when he was only 23 years old. Even though he was quite young, he had already played with some of the most respected musicians in bluegrass, playing both traditional bluegrass with Stanley and progressive newgrass with the Country Gentlemen and Crowe. With Boone Creek, Skaggs wanted to create a music that approached traditional bluegrass with a progressive attitude. To achieve this sound, he added electric guitar, drums, and piano to the traditional bluegrass lineup.
Boone Creek released its eponymous debut in 1977. It was quickly followed by One Way Track in early 1978. After the release of One Way Track, Skaggs broke up the group and joined Emmylou Harris' Hot Band. Skaggs would achieve solo success after leaving Harris in the early '80s.