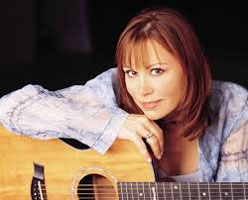 One of the most acclaimed female country singers of the late '80s and '90s, Suzy Bogguss was able to balance country tradition with a contemporary mainstream sensibility, thereby satisfying both audiences and critics. Bogguss was born in Aledo, IL, in 1956, and began singing in her church choir at age five. Encouraged by her parents, she learned piano and drums as a child, and took up guitar as a teenager. While studying art at Illinois State University, she performed in local coffeehouses and clubs, and after graduating in 1980, she hit the road, playing wherever she could find a gig around the Midwest, Northeast, and even parts of Canada. She moved to Nashville in 1985 and worked as a demo singer while playing in clubs by night; she later took a job singing at the Dollywood theme park and sold tapes of her own music, one of which got her signed to Liberty/Capitol when a label executive heard it. Bogguss released her first singles in 1987, and her debut album, Somewhere Between, appeared the following year. It received hugely positive reviews for blending country's past and present, and featured covers of Patsy Montana's "I Want to Be a Cowboy's Sweetheart" and Merle Haggard's "Somewhere Between," and also produced a decent-sized hit in "Cross My Broken Heart." The 1990 follow-up, Moment of Truth, took Bogguss in a more polished direction, but failed to break her to a wider audience.That all changed with 1991's gold-selling Aces, which spun off a total of four hit singles: "Someday Soon," "Letting Go," "Outbound Plane," and the title track (the latter three all made the country Top Ten). Bogguss was now a star, and her 1992 follow-up, Voices in the Wind — a more pop-oriented effort — brought the highest-charting hit of her career in the number two cover of John Hiatt's "Drive South"; it also became her second straight gold album. 1993's Somethin' Up My Sleeve gave her two additional Top Five hits in "Just Like the Weather" and "Hey Cinderella." For her next outing, 1994's Simpatico, Bogguss took something of a left turn, cutting a charmingly low-key album of duos with guitar legend Chet Atkins; she also released a greatest-hits collection that year. Bogguss took a bit of time off to start a family with her husband and songwriting partner, Doug Crider, and returned in 1996 with Give Me Some Wheels, which proved a commercial disappointment. The same was true of 1998's Nobody Love, Nobody Gets Hurt, and Bogguss subsequently parted ways with Capitol and signed on with the smaller Platinum label. Her label debut, Suzy Bogguss (aka It's a Perfect Day), failed to reverse her downward sales spiral. In 2003, after a brief hiatus, Bogguss returned to the airwaves with Swing, a stylish collection of pop, jazz, and swing tunes from the likes of Billie Holiday, Nat King Cole, and Duke Ellington, followed by the holiday set Have Yourself a Merry Little Christmas later that year. In 2007 she released a collection of all new tunes, Sweet Danger, on the Loyal Dutchess label.