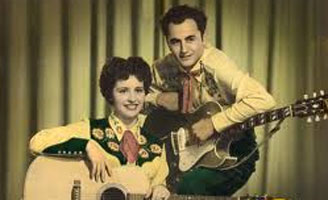 Lucille (Raymonde Marie) Starr (b Savoie, later m Cunningham). Popular singer, country singer, b St Boniface, Man, 13 May 1938. Starr was raised in Port Coquitlam and Maillardville, BC, and in her teens sang with the French ensemble Les Hirondelles. She began her career as Lucille Starr in Vancouver in 1954, and two years later with the singer-songwriter-guitarist-fiddler Bob Regan (b Bob Frederickson in Rolla, near Dawson Creek, BC, 13 Mar 1931, d Los Angeles 5 Mar 1990) formed a country duo, the Canadian Sweethearts. She also sang and recorded with country singer Keray Regan, his brother. Starr and Bob Regan married and moved to Los Angeles. As the Canadian Sweethearts, they enjoyed popularity across North America.
A versatile singer in many pop-music as well as country styles, Starr also recorded alone for A & M; her biggest hit was 'The French Song' ('Quand le soleil dit bonjour aux montagnes'), written by US songwriters Harry Pease and Larry Vincent. Sung in French and English, and characterized by Starr's distinctive vibrato, it was popular during 1964-5 in Canada, the US, Europe, Australia, Asia, and South Africa. The song and an LP of the same name (A & M LP-107) were reported (Country Music News, Jan 1988) to have sold 1 and 5 million copies respectively, making Starr the first Canadian female singer to earn a gold record. Starr's other hits during the 1960s included 'Yours,' 'Crazy Arms,' and 'Jolie Jacqueline,' for A & M, and 'Bonjour Tristesse' for Epic. Starr also was heard in this period on the popular US TV comedy 'The Beverly Hillbillies,' yodelling for the character Cousin Pearl.
Starr continued to perform with Regan until 1977. She then pursued a solo career. Of Starr's later singles, 'Power in Your Love' (1981) and 'The First Time I've Ever Been in Love' (1988) were popular in Canada. She toured during the 1980s with a troupe from Nashville's Grand Ole Opry, appeared with both Hank Snow and Wilf Carter, performed widely on her own in Canada, and was co-host 1989-90 for 'Canadian Country Express,' syndicated from CHRO-TV, Pembroke, Ont. She also performed several times as a headliner in Holland, where she made her first appearance in 1965.
Starr's other albums include Say You Love Me (A & M SP-4100, reissued as The Canadian Sweethearts, A & M SP-4106, and in 1975 as Lucille Starr with Bob Regan, 2-SP-9015), The Sun Shines Again (Starr Concert SCRA-79, issued in 1981, released after her recovery from Vocals cord polyps), Back to You (Cardinal RSP-159, issued in 1988), Sweet Memories (Disky DCD-5149, issued in 1991), and the bilingual Chansons d'Amour/Songs of Love (Intersound 1991). The anthology Side by Side: Pop and Country/Lonely Street (Collector's Choice), collecting her recordings for Epic, appeared in 2004. Starr also co-wrote songs with Bob Regan or others, eg on The Sun Shines Again; Sylvia Tyson recorded "Pépère's Mill." In 1987 Starr became the first woman inducted into the Canadian Country Music Association Hall of Honour, and in 1989 was made a member of the Canadian Country Music Hall of Fame. She was also the first woman to earn Europe's Gold Tulip Award; in 2005 she was an honorary inductee into Canada's Aboriginal Music Hall of Fame. A street in Port Coquitlam, BC, is named for her.
Starr's influences as a singer were Hank Snow and Peggy Lee. She is notable for being one of a handful of Canadian popular musicians to record in both English and French. Starr's son, Bob Frederickson, played guitar with a later version of the group Buffalo Springfield.
Bob Regan died on March 5, 1990. Lucille Starr died on September 4, 2020.