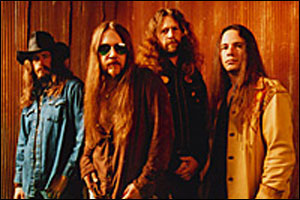 Blackberry Smoke brought Southern rock into the 21st century by ignoring fashion and sticking to the gospel according to Lynyrd Skynyrd. The Atlanta, Georgia-based quintet led by singer/songwriter Charlie Starr adapted Skynyrd's greasy blend of hard rock, blues, and country to their own ends, developing a muscular, straight-ahead sound that was showcased well on 2012's The Whippoorwill. Their first album to chart -- it reached 40 on Billboard's Top 200 and number eight on its country charts -- it lay the foundation for a strong, steady career, one that Blackberry Smoke cultivated with constant touring and steady recording. By 2021, when they released You Hear Georgia on Thirty Tigers, the band had two number one Country albums to their name -- 2015's Holding All the Roses and the following year's Like an Arrow -- and were known as a reliable quantity, a band who continued to deliver the kind of rock & roll that was made back in the good old days of the 1970s.
Blackberry Smoke -- singer/guitarist Charlie Starr, guitarist/singer Paul Jackson, bassist/singer Richard Turner, keyboardist Brandon Still, and drummer Brit Turner -- formed in Atlanta, Georgia in 2000 and quickly built a loyal fan base on the Southern tour circuit, opening for such top-tier acts as Lynyrd Skynyrd, ZZ Top, the Zac Brown Band, George Jones, and others.
The group released a debut album, Bad Luck Ain't No Crime, in 2004 on Cock of the Walk Records, then followed it with the self-released EP New Honky Tonk Bootlegs in 2008. A second EP, Little Piece of Dixie, appeared from Big Karma Records that same year. A full-length album, this one also called Little Piece of Dixie, was released in 2009 by BamaJam Records. The band then signed with Zac Brown's Southern Ground Records, which released The Whippoorwill in 2012. The album was picked up by Earache, which formally signed the band in 2013. A deluxe live audio and video package titled Leave a Scar: Live North Carolina was issued in the summer of 2014.
Later that year, the band left Brown's label and signed a deal with Rounder in the U.S. (Earache remained the group's European label). Taking a short break from touring, they entered the studio with producer Brendan O'Brien and emerged less than two weeks later with Holding All the Roses, then went straight back to working on the road. The album was released in February of 2015, debuting at number one on the Billboard country charts. Blackberry Smoke returned in the autumn of 2016 with Like an Arrow, their second album for Rounder. Throughout the following year, they were on the road to support it and returned to the studio to record their sixth full-length. The resulting Find a Light -- which saw them joined by guests pedal steel player Robert Randolph, violinist and vocalist Amanda Shires, and folk outfit the Wood Brothers -- was released in spring 2018. The set entered the Top Three of the U.S. country and indie charts, peaking just outside the Top 30 on the Billboard 200. A concert album, Homecoming: Live in Atlanta, appeared the next year and was recorded at the band's hometown venue, The Tabernacle. Another live set, this time captured at Macon, Georgia's famed Capricorn Studios, was released as the 2020 EP Live from Capricorn Sound Studios. For the recording of their seventh studio album, 2021's You Hear Georgia, Blackberry Smoke decamped to Nashville with the multi-Grammy Award-winning Dave Cobb. Jamey Johnson and Warren Haynes made guest appearances on "Lonesome for a Livin'" and "All Rise Again," respectively, while the title track challenged common stereotypes of their Georgia homeland.