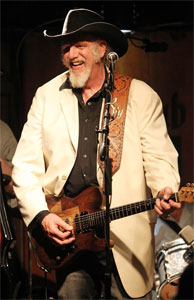 From the 1970s onward, few if any artists have done more to keep the sound and spirit of classic western swing alive than Ray Benson, the founder and leader of the group Asleep At The Wheel. While Benson has long been the sole constant member of AATW, he's occasionally made time in his busy schedule to cut solo albums and collaborate with like-minded friends. He was born Ray Benson Seifert in Philadelphia, Pennsylvania on March 16, 1951. Ray grew up with an eclectic taste in music, with a special appreciation for jazz (he once saw John Coltrane play a club gig in Philadelphia, and shook his hand afterward). Benson was attending Antioch College in Yellow Springs, Ohio when a friend and fellow student, Ed Ward, brought the band Commander Cody & His Lost Planet Airmen to campus to play a concert. Benson and his friend and fellow Antioch student Gene Dobkin were knocked out by Commander Cody's fusion of old-school country, western swing, and freak-friendly rock. As Benson was awakened to the possibilities of vintage Western sounds, he and Dobkin decided to form a band. Teaming up with Floyd Domino (aka Jim Haber), Lucky Oceans (aka Ruben Gosfield), Leroy Preston, and Chris O'Connell, they formed a band called Asleep At The Wheel, and after months of rehearsal in Paw Paw, West Virginia, they started playing out. While the group followed Commander Cody to California and landed their first record deal there after Van Morrison praised the group in Rolling Stone magazine, Asleep At The Wheel truly found their home when they were booked to play the Armadillo World Headquarters in Austin, Texas in 1973. Benson and his bandmates fell in love with the city, and a local musician named Willie Nelson suggested they should stay. With time, Asleep At The Wheel became an Austin institution and one of country's most indefatigable acts, constantly criss-crossing the country, winning several Grammy awards, and sharing stages with everyone from Bob Dylan to George Strait, even as Benson became their sole constant member, while over 80 musicians made their way through the lineup. Meanwhile, Benson became a behind-the-scenes figure of note in Texas, opening a recording studio (Bismeaux Studios) and an affiliated record label, co-founding the Rhythm & Blues Foundation, sitting on the board of directors of the TV show Austin City Limits, and hosting another show, Texas Music Scene. In 2003, after releasing nearly 20 albums with Asleep At The Wheel, Benson cut his first solo effort, Beyond Time. Benson released a second solo album, A Little Piece, in 2014, and 2015 saw the publication of Comin' Right at Ya, an autobiography Benson wrote in tandem with David Menconi. In 2017, Benson teamed up with another Lone Star roots music traditionalist, Dale Watson, to release the duo album Dale & Ray.