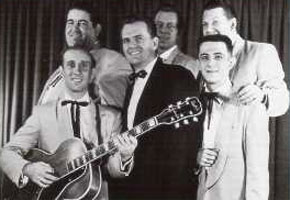 Boyd Bennett's music fell into the cracks between country and the early days of rock & roll. Boyd never received much recognition from country circles while he was performing, possibly because his music sounded more like the emerging rockabilly than hardcore honky tonk.
Bennett was raised outside of Nashville, performing as a drummer and singer with a band led by Francis Craig. After a stint in the military at the end of World War II, he became a regular performer on a local radio station, assembling a band named the Southlanders. The Southlanders sounded similar to Western swing, with some additional honky tonk grit. Bennett signed with King Records in late 1952, recording his first single in December. The resulting record, "Time," became a minor country hit the following year.
Later in 1953, Bennett revamped the Southlanders, renaming them the Rockets and adding R&B and blues elements to his music with the intention of gaining a younger audience. Not coincidentally, this occurred at the same time Bill Haley was reworking his sound and renaming his backing band the Comets. Early in 1955, Bennett and the Rockets recorded the rock & roller "Seventeen." King Records was unsure of the record's commercial appeal, yet they eventually released it, which proved to be fortunate. "Seventeen" rocketed to number five on the pop charts, eventually becoming one of the best-selling records in the label's history. Not only was the original successful, but the song spawned several cover versions, making Bennett and his co-author John Young several million dollars.
The Rockets' next single, "My Boy Flat-Top," was sung by the group's Big Moe (aka James Muzey), and it also made it into the pop Top 40. In 1956, the Rockets supported Moon Mullican on the classic rockabilly single "Seven Nights to Rock." One more Rockets single — a 1956 cover of Carl Perkins' "Blue Suede Shoes" — was a minor pop success, but the Rockets couldn't replicate their success with "Seventeen" no matter how many times they tried. And throughout 1957 and 1958 they tried a lot, recording several regional hits ("Hit That Jive," "High School Hop") that never made it nationally. While all of these songs touched on rockabilly, they were significantly tamer than most of their contemporaries; consequentially, the Rockets never developed much of a cult following.
Boyd Bennett left King Records in 1959, signing with Mercury Records. Late in 1959, he had one minor hit on his new record label, "Boogie Bear." After a series of unsuccessful singles, Boyd realized that he was too old for the current rock & roll audience and decided to retire from performing. With the money he earned from "Seventeen," he had already bought three nightclubs and co-owned a television station. A decade after his retirement, he founded Hardcast Manufacturing, which primarily constructed parts for air conditioning. For most of his musical retirement, Bennett lived in Dallas. With the exception of the occasional charity concert with Ray Price, Boyd Bennett never reentered the music business.
Boyd Bennett  died on June 2, 2002.