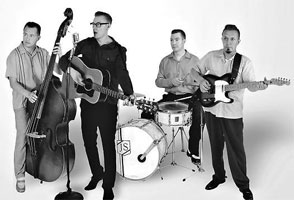 Mike Bell & The Belltones play wild and melodic rockabilly. The band includes members from top rockin´ finnish bands such as The Beetle Crushers, The Roadracers and The Wagtails and was formed late 2004. Since then they have played at all the main rockin´ festivals in Finland and have gathered a great following with their live shows all around.
Goofin´ Records released their EP “Moonlight Rock” in 2009 and their song “Let´s Rock Tonight” was included in the history of the Finnish rockabilly box-set “Slap that Bass!”, which also hit the official album charts! Later this year they will appear on a Bear Family records 35th anniversary compilation with a brand new song.
Goofin´ Records is now releasing the first Mike Bell & The Belltones´ album “Scream & Holler” which was recorded live at the Lightning Recorders in Berlin with a vintage equipment. And even more international gigs will follow as they will also be touring and playing at festivals in Spain, Sweden, Holland and Germany later this year.