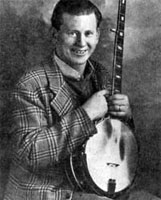 With a stage name like a Communist sympathizer who suffers from indigestion, this Kentucky performer recorded several historic early bluegrass tracks featuring fiddler Tex Logan in the late '40s, by which time the banjo-licking Belcher had already been active on the Appalachian music scene for more than two decades. His partnership with Logan was one of several collaborations he had with excellent fiddlers. He took in the fine old-time and bluegrass fiddler Jim Bowles as a young player in his 20s, giving this apprentice his first taste of a professional musician's life. The banjo player was born Finley "Red" Belcher and, by the late '20s, was gigging regularly with Bowles throughout south and central Kentucky at a variety of events that might incorporate music, including but not exclusively dances, pie suppers, picnics, and drunken brawls. They would sometimes perform shows at countryside school buildings in towns such as Gamaliel and Fountain Run, KY. Putting on these events was an exercise in self-determination for these old-time players, involving renting a building such as a schoolhouse or movie theater, and putting on their own show, the promotion limited to old-fashioned word of mouth. The Tuscola radio station WDZ was a pioneer in presenting live country music broadcasts in the late '30s and became an important outlet for the Belcher group, with a listening audience extending to the lower Midwest as well as the upper South; even on a slow radio night representing a much wider community than could be accessed by any one self-produced gig. This show became a home base for many early hillbilly performers, including the Carver Boys, Bluegrass Roy Freeman, Frank Dudgeon, Slim Miller, Gene Autry, and Smiley Burnette. Bowles, Belcher, and younger brother Levy Belcher formed a new group for these broadcasts known as the Kentucky Coon Skinners, landing a show that aired each day before sunrise, probably a good time to reach an audience of ambitious, early-rising coon skinners if no one else.
Traditional fiddle tunes and ballads as well as "new-fangled" sentimental and novelty numbers made up most of the program, and an occasional sacred number was thrown in to keep in the good graces of local preachers. The Tuscola residency proved to be a busy one for the ensemble. Following the crack-of-the-morning broadcasts, the musicians had to reassemble their heads to play gigs just about nightly at county fairs and picnics. Following the eventual disbanding of this active group, the banjoist returned to Illinois and took up a successful career that eventually included broadcasts on several radio stations in Missouri, Chicago, and finally the bluegrass and old-time stronghold of WWVAin Wheeling, WV. A car accident in 1952 brought an abrupt and tragic end to the life of this highly enjoyable performer. By this time, he was leading the Kentucky Ridgerunners, a group that included at times both the Lilly Brothers as well as Logan. In 1948, this group recorded a manic version of "Old Grey Goose" and the haunting "Kentucky Is Only a Dream" for the small Page label of Pennsylvania. The former song is a particularly carefree, almost crazy reworking of the gospel number "Jordan Am a Hard Road to Travel," as good an example as any of how fascinating traditional music is as it mutates from one style to the next.