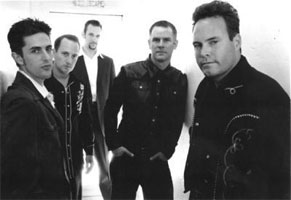 The Bastard Sons of Johnny Cash, who came together in 1995, play modern country with an "outlaw" edginess, with some of the attitude and some of the swagger of artists we've come to expect from the man in black himself, Johnny Cash, or from Waylon Jennings, Merle Haggard, and Kris Kristofferson, to name a few others.
Mark Stuart and his fellow Bastard Sons — Dean Cote (guitar), Clark Stacer (bass), and Joey Galvan (drums) ( an early lineup included Buzz Campbell (lead guitar), Alex Watts (lead guitar), and Johnny D'Artenay (bass)), — had been playing in blues and rock bar bands, along the lines of Blues Traveler and the Black Crowes in their native San Diego, but it was Stuart's love of country music that led him to putting together this outfit, even though his city had no country music scene whatsoever when we started out. Like his musical heroes, Stuart didn't change Bastard Sons to fit contemporary in with country's heavily produced, pop-oriented Nashville-Branson sound.
The band saw their stock soar after opening for Haggard at the Coach House, in San Juan Capistrano. They recorded their own six-song EP and hit the road, playing gigs along the way with Willie Nelson, Joe Ely, Asleep at the Wheel, Billy Joe Shaver, Dale Watson, and the Derailers (to name a few), and received a lot of attention along the way from record label reps, including two former San Diegoans who both saw potential early on: Joe Rinaldi (A&R) and Lou Niles (VP) of Ultimatum (a record label started by the William Morris Agency), who signed the group in December of 1999.
Another self-produced nine-song CD, Lasso Motel, garnered more attention (they were proclaimed one of the Top 100 Unsigned Bands in 1997 by industry rag Music Connection) and in 1998, they received an invitation to perform for over 20,000 attendees of Willie Nelson's Annual 4th of July Picnic in Luchenbach, TX, a three-decade-old institution featuring today's rebel artists of country music.
In case you are wondering, this band earned Cash's permission to use his name (who reportedly went against the advice of his own organization to give his blessing). "He's been very supportive over the years, and even helped us get a show at the House of Blues in Los Angeles, which really helped us get a lot of industry attention," said Stuart during one interview, "and that's just one more reason we'd really like to keep the name, and honor the man." After much recording, touring, and numerous personnel changes, Walk Alone, their full-length debut, was released in early 2001. Distance Between arrived in 2002, followed by Mile Markers in 2005. Stuart relocated to Austin, TX, and reorganized the band, eventually renaming it Mark Stuart & the Bastard Sons. At this point, the lineup consisted of Stuart (Vocals, acoustic guitar), Lars Albrecht (guitar), Vance Hazen (bass, Vocals), and Jim Adair (drums, Vocals). Texacali Records released Bend in the Road, the first album under the group's new moniker, on September 22, 2009.