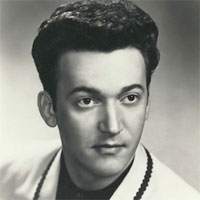 Early rock 'n' roller Joe Barry, a Cajun from southern Louisiana, began recording locally in 1958. In 1961, his second single for Jin Records, "I'm a Fool to Care," was picked up nationally by Mercury Records' Smash subsidiary, and peaked in the pop Top 40, also reaching the R&B charts, and even charting in the U.K. Its follow-up, "Teardrops in My Heart," also made the pop charts. Barry continued to record for Smash, and later Nugget Records in the 1960s, but stopped working in music full-time by the end of the decade. In 1977, He released a self-titled country album on ABC-Dot Records, and in 1980 he made a religious LP, Sweet Rose Of Sharon. But that appeared to be the end of his recording career until early in the 21st century, when, despite numerous ailments that have limited his ability to sing for more than 30 seconds at a time, he was able to record a new album, Been Down That Muddy Road, for Night Train Records, doing Vocals overdubs for a period of two-and-a-half years. The album was released August 19, 2003. Just over one year later, on August 31, 2004, Joe Barry succumbed to the illnesses that hounded him and passed away in his hometown of Cut Off, LA.