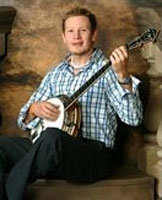 A fine bluegrass banjo player, Stevie Barr was born in 1975 in Galax, VA, in the very heart of old-time string band country. The son of Rebecca and Thomas Barr, he grew up in a family dedicated to making music, and was playing banjo by the age of four. Thomas, a fiddle maker, owned and operated Tom Barr's Fiddle Shop in Galax, a gathering spot for bluegrass and old-time musicians the world over, and Stevie literally grew up in the shop, taking it all in and becoming a fine player in his own right. He made his first recording, a cassette of bluegrass banjo classics, in 1986. He formed the bluegrass group No Speed Limit with Jacob Eller on bass and vocalist Amber Collins (who was only 16 when the band first came together), who were eventually joined by Josh Pickett on guitar and Ryan Blevins on mandolin. The group released a CD, Bluegrass Lullaby, in 2005, followed by a second, Sweet Virginia, a year later in 2006. Barr has also released two solo albums, Then and Now Bluegrass Banjo and Along the Crooked Road, which appeared on Arhoolie Records in 2007.