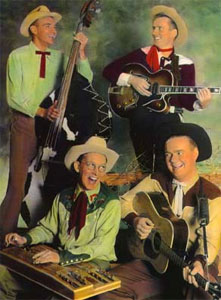 Dutch Country group formed in September 1991 and composed of K.C. Byrd, Jeroen Haagedoorn (aka Larry Tulip), Rutger Berends and J.J. Slijk. The authentic music of The Barnstompers is based on the late forties and early fifties traditional American Country-Boogie, Western-Swing, Honky Tonk and Rockabilly. The excellent combination of musicianship and vocals makes The Barnstompers an exciting band. This "Swingbilly" band is definitely worthwhile seeing perform live. Their unique repertoire and musical talents is what makes them different from many other bands. The band enjoys popularity both at home in the Netherlands and abroad. Having performed at many major foreign festivals is witness to the fact that they are a much-requested band in many parts in the world. They have performed in Austria, Belgium, Denmark, England, Finland, France, Germany, Ireland, Italy, Norway, Spain, Sweden, Switzerland, Wales, and did multiple tours in the USA. They performed live on a national radio show called "Country Time" and songs of their second CD were played on national radio multiple times. In April 2004 they played at the worlds biggest Rockabilly event in Las Vegas, Nevada. Just recently in October 2006 they won 4 prestigious Dutch Country Awards.