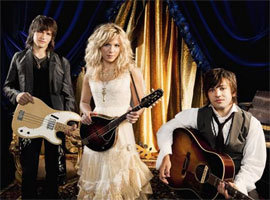 Merging country, pop, and rock elements into a sharp contemporary sound, the Band Perry is comprised of siblings Kimberly Perry (lead Vocals, guitar, and piano), Reid Perry (bass guitar), and Neil Perry (drums, mandolin, and accordion). The group officially formed in the summer of 2005, although the siblings had been singing together at home and in various configurations and bands since their childhood years in Mobile, AL. Kimberly, blessed with an expressive and fiery Vocals style, joined and fronted her first band when she was only 15 years old, and used her brothers Reid (ten years old) and Neil (eight years old) as roadies. Eventually, the two brothers formed their own band, and often worked as an opening act for their sister. All three still sang together at home, though, perfecting their three-part harmony style and writing songs on occasion.
In 2005, all three officially joined forces as a working band and found themselves on the New Faces of Country tour that same year. Three years later, the group met Garth Brooks' manager Bob Doyle, who liked what he heard from the group and moved the threesome into the studio to work on songs. The recordings caught the attention of Scott Borchetta and Jimmy Harnen of the newly formed Republic Nashville label, which quickly signed the band in the summer of 2009. A debut single, “Hip to My Heart,” was issued in November of that same year, which also saw the Band Perry begin working on their debut album with producers Nathan Chapman and Paul Worley. A self-titled EP was released in May 2010, followed by a full-length of the same name later in the year.