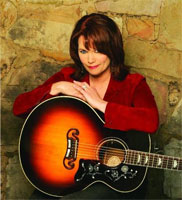 Country singer Kathie Baillie had a long and successful career in the music along the way to the release of her first solo album in 2007. Kathie Baillie was born in Morristown, NJ, in 1951, and spent most of her childhood in Orange, CT; her parents encouraged her youthful enthusiasm for music, and when she was a teenager she started performing at local coffeehouses and school functions, playing acoustic guitar and singing folk and singer/songwriter-oriented material. In 1973, Baillie met fellow singer and guitarist Michael Bonagura, and the two hit it off both personally and musically; they began playing folk clubs together, and would eventually marry. Baillie and Bonagura added their friend Alan LeBeouf to the act, forming an acoustic pop trio called Bittersweet; the band worked steadily on the East Coast club circuit and scored a record deal with the Atlantic-distributed Big Tree Records label, though they also did session and jingle work, putting the skillful harmonies to work to help pay the bills. In 1982, Baillie and Bonagura relocated to Nashville after Baillie had landed some gigs singing backup on country sessions in Music City; after adding harmonies to recordings by Randy Travis, Moe Bandy, and Lynn Anderson, Baillie and Bonagura became a trio again when LeBeouf joined them in Nashville, and Bittersweet began earning a potent reputation in Nashville. After playing a number of live shows, Bittersweet came to the attention of RCA Records, who signed the group to a recording contract in 1985 and changed their name to Baillie and the Boys. The group's first single was released in 1986; "Oh Heart" became a hit, and Baillie and the Boys became a consistent presence on country radio for the next several years. Baillie and the Boys' near-constant road work led LeBeouf to quit the group after 1989's Turn the Tide, though he would return for their 2000 release The Road That Led Me to You, which found the group recording for their own label, Synergy Records. In 1991, Baillie began to step out on her own as a television personality, co-hosting the Music City News Awards telecast, and also became a regular host and performer on Yesteryear, a show on The Nashville Network. While the demands of parenthood took priority for Baillie in the late '90s (her teenage daughter Alyssa Bonagura has launched her own career as a singer and actress), in 2007 she finally released her first solo album, Love's Funny That Way, produced by Michael Bonagura and featuring guest appearances from Vince Gill and Paulette Carlson of Highway 101.