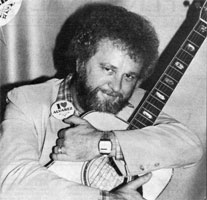 A singer whose vocal style fused country with blue-eyed soul, Alabama-born Rasie Michael "Razzy" Bailey cut his first recordings in 1949 at the age of ten. By 15, he led a string band, sponsored by the local chapter of the Future Farmers of America, which came in second in a talent contest held at Auburn University.
Bailey married and had children immediately after graduating high school; as a result, his career as a performer was sporadic and unsuccessful for a number of years. In 1966, he contributed a number of songs to Atlantic Records' Bill Lowery, among them "9,999,999 Tears," which Lowery agreed to produce. While the single, on which Bailey was backed by a studio band featuring Billy Joel, Joe South, and Freddy Weller, failed to chart, it renewed the singer's interest in pursuing a recording career full time. As a result, he formed the pop-oriented trio Daily Bread in 1968, releasing a pair of albums on small labels. Another group, the Aquarians, followed in 1972; in 1974, Bailey recorded the album I Hate Hate simply as Razzy.
After I Hate Hate failed to chart, Bailey again dropped out of music, but in 1976, singer Dickey Lee hit number three with a cover of "9,999,999 Tears"; after Lee hit the Top 20 with another of his songs, "Peanut Butter," Bailey signed a new recording contract of his own. In 1978, he released the single "What Time Do You Have to Be Back in Heaven," the first of five consecutive Top Ten hits.
Between August 1980 and December 1981, Bailey reached his commercial peak with a string of five number one hits — "Loving Up a Storm," "I Keep Coming Back," "Friends," "Midnight Hauler," and "She Left Love All Over Me" — and in 1981 was named Billboard magazine's Country Singles Artist of the Year. The albums Razzy (1980), Makin' Friends (1981), Feelin' Right, and A Little More Razzy (both 1982) were also very successful.
By the mid-'80s, however, Bailey's hit-making days were largely over; his singles landed only in the lower rungs of the charts. In 1987, he began issuing his records through his own label, SOA (Sounds of America). In 1993, the release of the album Razzy Bailey: Fragile, Handle With Care was marred by the suicide of Bailey's wife, Sandra.
Razzy Bailey died on August 4, 2021 in Goodlettsville, Tennessee.