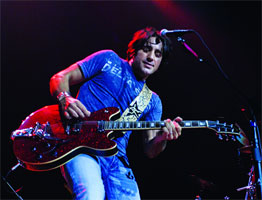 A product of the Mississippi Delta region, Steve Azar was born April 11, 1964. After moving to Nashville to pursue a career in music, he released his debut album, Heartbreak Town, in 1996. The single "Someday" was a moderate hit on the country charts, and Azar returned in 2001 with the Top Ten country smash "I Don't Have to Be Me ('Til Monday)." It crossed over to the pop Top 40 in April 2002, and made the album Waitin' on Joe a heatseeker hit as well. Azar has since released two albums on independent labels: 2007’s Indianola on Dang/Ride and 2009’s Slide on Over Here on Ride Records.